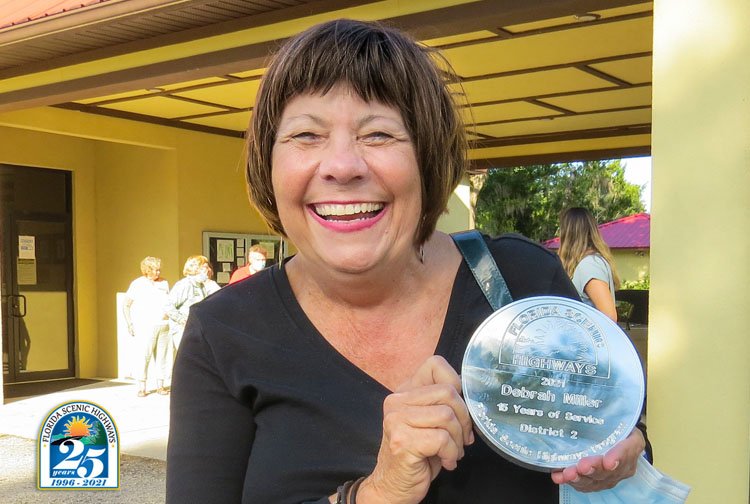 Debrah Miller was presented with the FSHP Distinguished Service Award in October, 2021.

Debbie has served as the District Scenic Highways Coordinator (DSHC) for FDOT District 2 since the year 2006. During her time as DSHC, the number of byways has grown, and currently includes four designated byways located entirely within District 2 and three more which share boundaries with District 5. One of these is recognized as an All American Road and another as a National Scenic Byway by the Federal Highway Administration (FHWA). Since starting as the DSHC, she has worked closely with each of her byways and their volunteers to advance their individual missions, and to applaud their accomplishments.

With her engineering background, great dedication to the Program, and her willingness to work with byway leaders, government officials and FDOT personnel, Debbie has contributed greatly to the advancement of the FSHP, and has helped in expanding and maintaining the Program at a high level.

Debbie’s leadership was integral in having the JC Penney Memorial Scenic Highway and the A1A Ocean Islands Trail added to the collection of 27 byways that are found throughout the state. She worked closely with Florida Black Bear Scenic Byway and the A1A Scenic & Historic Coastal Byway in their success in seeking National Scenic Byway designation. She also helped the A1A Scenic & Historic Coastal Byway organization as they successfully achieved All-American Road designation with the FHWA in the years 2020 and 2021. Debbie shares a laugh with other attendees at the 2018 Florida Scenic Highways Statewide Meeting.

Debbie has been a strong advocate of the Program in District 2, having produced a highly regarded video of the District’s scenic highways program, as well as informational rack cards representing District’s byways.

Her accomplished 15-year tenure in this position as DSHC is a reflection on her many positive qualities. She is well respected in the byway community and has been called on many times to provide insight on Program issues, requiring her expertise and extensive understanding of the Program. Debbie’s dedication during the last 15 years has been shown through many late nights attending numerous byway organization meetings across the District and the state. To every meeting, she brought a vast knowledge of the Department’s plans and policies, and a knack for being able to explain in understandable terms how organizations interact with the scenic highways program.

Successful coordination efforts included maintaining open channels of communication between various entities, including local authorities and agencies, volunteers and internal FDOT offices. Her skill for coordinating with various FDOT Departments as well as governmental agencies, helped ensure that the goals of each individual scenic highway were met.

District 2 has been well served by Debbie’s hard work and commitment. Because of her efforts and dedication, the future of the Florida Scenic Highways Program in District 2 is very bright.

Thank you Debbie for all that you have given to the Florida Scenic Highways Program!